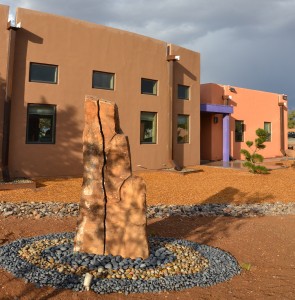 Southwestern College has been about “consciousness” since the day it opened its doors in 1979 as Quimby College. As time passes, we constantly become aware of new dimensions of consciousness and how to use it to fulfill our responsibilities to the planet.

Several years ago, college leaders made a commitment to ‘walk their talk,’ not only in the academic arena, but also in relationship to the environment. The leaders planned a green and sustainable future for the college. The foremost “green”-oriented architectural firm in Santa Fe was hired to draw up plans for the college’s future growth. Then after years of saving, and receiving donations from ecologically-minded supporters, the College was ready to build a new Art Therapy Complex in 2009, without borrowing money, which is unheard of these days. 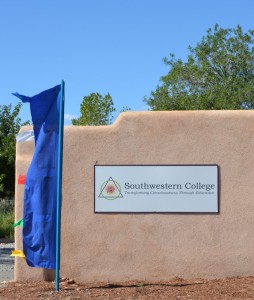 This strong commitment and financial start impressed the federal government enough to grant Southwestern $130,000 to make the building even more green than originally planned. The grant allowed SWC to install seven large rain catchment tanks to supply our drip irrigation system for the landscaping of the building (very important here in the high desert). The grant also funded the addition of photo-voltaic cells on the roof of the new building, which will generate enough electricity to power the entire campus with more left over to sell to the city.

In addition, we have an active recycling initiative on campus and we are working to move any printed materials to electronic versions for student use, to foster an awareness of the high ecological cost of printing everything on paper.

Consciousness is a powerful thing. When you apply it intentionally, magic happens. We think our green/sustainability initiative is part of that magic.