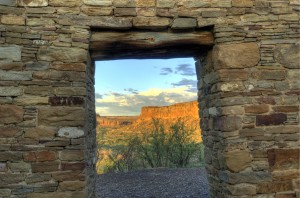 Since so many of our students come to us from out of state, many want to explore the region and there is so much here to discover and experience! Chaco Canyon is an ancient site that is popular to visit. I will share my experience here just to give you a flavor….

Chaco is only a 3-hour drive from Santa Fe, and it is one of those special spots that you will never forget. Chaco Canyon has 1,000-year old ruins that are pretty spectacular to see. We decided to camp in the canyon and found a great place at the park campsite. The site we chose had a small cave-like area large enough to set our camping chairs in so that we could escape the sweltering heat of summer. We had a great lunch and dinner in the shade of the rocks and were quite pleased with ourselves to have found a place to duck out of the heat.

I had expected old adobe ruins and instead saw amazing masonry. There are 300-450 foot long walls that are 3-4 stories high and you just stand there scratching your head trying to figure out what it was all like in the year 1,100 AD. Wow!  In the evening we watched a beautiful sunset at the great kiva, and I spotted an elk in the distance and watched her cross the road and head in our general direction. Tiny bats skittered above us as the elk made her way closer and closer, with the sun offering its last great show.

Later in the evening we attended the “Night Sky Program” offered by the national park. The stars in the sky were plentiful and the big telescopes offered surprises. Astronomers set up the telescopes to focus on particularly spectacular sights…. I saw a dying star – a nebula. It was awesome!  Many say that the people who lived in this canyon so many years ago were quite attuned to the stars, sun and moon. There were a number of buildings and sites in the canyon that experts have discovered align with the moon or sun in remarkable ways.

I agreed to “climb” the edge of the cliff side on the trail to reach Pueblo Alto – another site with ruins on top of the mesa.  As I ascended the cliff, I realized that you need to be very careful and relatively brave to do this. It is not an easy climb!! But boy…is the view worth it! As one stands above on the mesa there is a panoramic view and then immediately below is Pueblo Bonito – the largest ruin that is in a huge “D” shape with kivas and dozens and dozens of rooms all within its great walls.

Originally from the east coast, I still am pretty amazed, all these years later, when I explore and experience the west and southwest United States. What an incredible region of our country!! It is always great to hear the students share their experiences when they are here in New Mexico – “The Land of Enchantment.” Hope you enjoyed this one!

Since I am on the subject of ancient times I will have to share with you that just a few miles down the road from the college here in Santa Fe are petroglyphs. Not just a few….but thousands of them! It is not clearly marked so you need directions to get to them. If you visit us and want to see these petroglyphs, make sure you ask me for directions to get there. Imagine just stumbling upon images on rock that were drawn there hundreds and hundreds of years ago by the tribal people in the region? Pretty cool, huh?

Dru Phoenix
Dru is a graduate of the SWC MA in Art Therapy/Counseling program. In her spare time, she serves as the Director of Enrollment Services at SWC and has a private practice. She is the proud guardian of two pups – Kioko and Suki and is a huge animal lover!
Tags: New Mexico Chaco Canyon

Counseling, Consciousness, and Survival in…

I never thought that the coursework in a master’s degree in counseling would help me to...