Moving to Santa Fe at the end of July gave me a great opportunity to get to know my new home town way ahead of schedule; or so I thought. Most of my time before the start of school was spent traveling to other states, working on writing projects and trying to wrangle the Feng Shui back into my living space and my life. This is how I happened to be going on my first hiking trip less than a week before the first day of class. Bryce Downey planned a phenomenal excursion to the Tent Rocks Monument in Cochiti Pueblo. It was great to meet so many fellow students in person. Everyone was new to Santa Fe, new to SWC and certainly new to hiking the Tent Rocks trails. Bryce had the brilliant idea for us all to meet up at 7:30am; the air was cool, crisp and felt great! The drive to Cochiti Pueblo was shorter than I thought and before I knew it “Tent Rocks” appeared majestically right before our eyes. Attempting to describe with words those magically shaped mountains is nearly impossible. 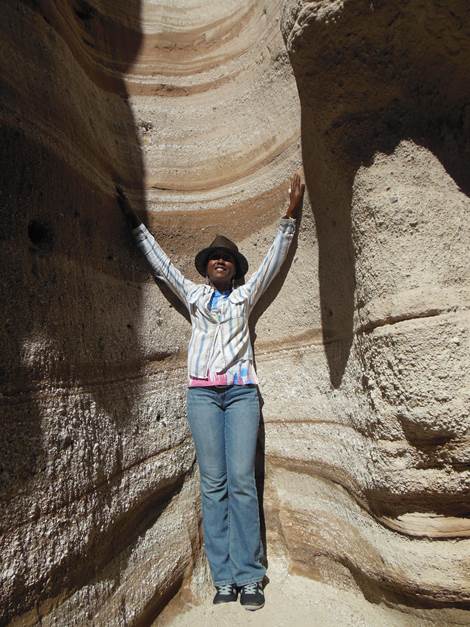 I noticed immediately that the air was much different up on the trails. It was really clean; the scents of sage and butterscotch wafting from the mighty pines surrounded us the entire time we were there. Those mountains weathered by time, water; wind and sun are one of the many wonders of this earth. Ancient trees twisted by the breath of the wind. Some trunks were as smooth as silk to the touch; others appeared to be coming apart at the seams. Blasted from an energetic explosion taking place over the millennia. Tent Rocks offered something for everyone. Mountains obviously carved by the Gods who were probably playing a game of kickball. Splashes of iridescent green foliage, and the occasional desert flower that beckons the viewer to come closer. 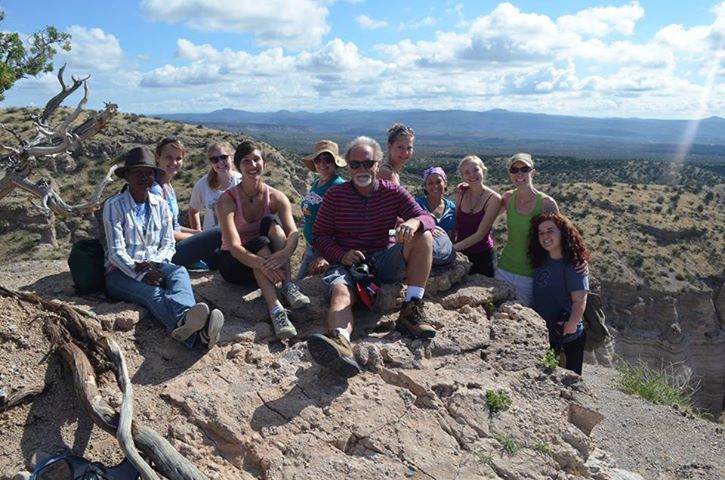 What type of spiritual communion happens with nature in this place? Most importantly what happened to me on this hike? High up on the trail I came upon an oasis of shade with a tantalizing cool breeze that swirled around me. It was almost as if I could hear the breeze laughing and playing. I immediately thought this was a perfect place to rest for a moment. Just as I was about to sit down, my eyes traveled to the tree that was providing that awesome shade. I saw a sign that snapped me back into my senses, “Beware of snakes!” My next thought as I was hightailing it out of there; was that I better keep it moving. Along the way a deeply scratched finger (so glad I brought band aides), a bruised knee (bumped into a rock and the rock won!) and a nearly twisted ankle kept me company for the entire hike. To be honest… I had the time of my life! It was an exceptional moment in my existence and I’m so glad I made the quantum leap to attend SWC which of course brought me to Santa Fe.

Jim Nolan, Former President
Jim Nolan was the President of Southwestern College from 2006 - 2018. He holds a Ph.D. in Counseling Psychology, and has a private practice in Santa Fe. He went to graduate school in Irish and English literature, too, and reads a lot of books, takes a lot of photos and plays guitar. Sort of. His best friend of all times, a Wire Haired Fox Terrier named Barney, recently passed into non-physical. Barney was a true guru. Jim is the opposite of a guru, whatever that is called. He doesn't know anything, and he knows that. It seems to work out...
Tags: Southwestern College New Mexico Tent Rocks Magic Mountains Natascha Holmes

My Trip to Tent Rocks…Kasha-Katuwe…

First Impressions of a Maverick…

Student Amy Gordon's reflections on the beginning of graduate school at Southwestern College......

What I Love About My…

It has officially been two months since I made Santa Fe my home, and the beauty...