My Journey With My Ally Plant, by Dr. Carol Parker

About 10 years ago while leading one of my first Wilderness Fast ceremonies in a remote location in Death Valley, I was shocked when a young woman named Ricki returned from her solo site laden with three-foot long stalks of Wild Tobacco. I had no idea tobacco could grow in such a bone-dry environment. Ricki is an accomplished herbalist, and explained to the group that she had found a spring about two miles from base camp in a hidden canyon, and near the spring were thick stands of this sacred plant. She planned to dry them and use the dried tobacco in ceremony.

A few months later, Ricki called from her home in Southern New Mexico and asked me to go with her and some friends on a “plant walk” in the Chiricauhua Mountains near the Mexican border. She wanted to teach us how to identify various desert herbs. She casually mentioned that we might be lucky enough to find some Wild Tobacco out there. I found myself immediately drawn to this adventure, especially after she mentioned Tobacco! Prior to the Quest in Death Valley, I had given little thought to the role of plants in North American indigenous traditions and ceremonies, although I had learned from various shamanic teachers to make small offerings of tobacco and cornmeal in order to connect with Mother Earth. After Ricki’s incredible discovery of Tobacco growing in the remote desert of Death Valley, I found myself waking up a bit more to our relatives in the plant kingdom. Tobacco, however, carried an aura of addiction and ill-health in my mind. Still, when Ricki issued the plant-walk invitation, I noticed I was feeling drawn to the idea of finding Tobacco in the Chiricahuas!

We met in Silver City, New Mexico, and caravanned to our campsite in a lovely red-rock canyon in the desert-mountain landscape, about 30miles from the nearest town or ranch-house. Ricki knew this part of New Mexico very well from many prior herb walks with her teacher.

No other campers or hikers were in the area, so we wandered freely for hours the first day, looking for desert herbs, and enjoying the discovery of arrowheads and other evidence of prior wanderers, probably Apache hunters and gatherers a century or more ago.

Ricki disappeared for a while, and then returned breathless, to announce she had spotted some Wild Tobacco. I quickly volunteered to return to the area with her, and as we hiked through the sandstone spires and dry riverbeds, I found myself very excited that we might run into a stand of Tobacco. As I came around a stone outcropping in a sandy arroyo, I suddenly saw a plant with large green leaves about 2 feet tall. The plant seemed almost to jump out at me, and it was glowing with a golden light around it.

I don’t usually see auras, so I was taken aback by this very clear visual experience.

As I stood there entranced by this vibrating glowing plant, I suddenly knew exactly what it was trying to convey to me. Its message was, “I am your Ally Plant.” 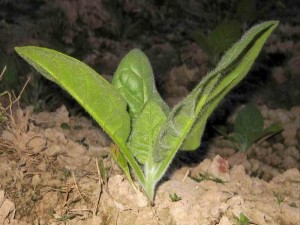 Stunned, I walked away in silence and later told Ricki about the encounter. She had fallen behind me in the canyon and had not seen this particular Tobacco plant. She wanted to go back and harvest some of it, but I asked her to leave it there. That night, wide awake in my sleeping bag, my prejudices about Tobacco slipped away as I wondered, with excitement, what it might mean to have an “Ally Plant” and how this relationship might develop over time. I remembered stories of shamans and curanderas who spent years wandering in the jungle or desert, sitting ceremonially with various plants in order to learn from the plants themselves their medicinal uses. I wondered why the Tobacco plant had called me, and what I was supposed to do about it.

A few months later, I decided to drive up to North Dakota to support a Sun Dance on the Cheyenne River Sioux Reservation. A Lakota elder had issued the invitation to me and a couple of friends, and we were thrilled to have the opportunity to learn more about this amazing ceremony and to participate in it. The Sun Dance Chief said we needed to each have a ceremonial Pipe, so he carved the Pipestone himself and fashioned traditional Lakota Pipes for us to carry during the ceremony. He also taught us the proper way to fill them with Tobacco and Red Willow, as well as the correct way to make the prayers, smoke the Pipe, and clean it afterwards. I was all thumbs. I seemed to be doing everything backwards! The Chief was not particularly pleased and told me so! I have since learned that the Lakotas often teach in a rather abrupt way which can sound harsh or punitive to non-Native people. Since this was my first teaching from the Lakota tradition I felt embarrassed by my mistakes and ineptness, and didn’t recover my confidence for many months. I put my Pipe away; I thought perhaps one day I would learn to use it correctly, but right now I had no desire to smoke it. I kept it in my car in a Pipe bag, along with some tobacco and red willow, but soon forgot it was there.

One spring day about nine months after the Sun Dance, I drove to Taos, New Mexico to see a friend there who was house-sitting. I walked in to the old adobe structure and instantly was bowled over by the heavy, dark energies in the place. “Eliza, how can you sleep in here?” I asked her. She said she, too, had felt the negativity and had to camp outside each night. Suddenly I remembered my Pipe. Driven by the powerful sense of needing to do something to clear the house, I asked her if she would be willing to do a Pipe ceremony with me and pray for the negative entities to be released and move to a better place. She agreed, so I filled the Pipe as best I could remember, and we made our prayers and smoked. The Tobacco and Red Willow smoke soon filled the room. In about five minutes, we both felt the shift as the heavy energies departed. Amazed and grateful, we slept inside the house that night!

Since then, I have consciously developed my relationship with my Ally Plant, the Wild Tobacco. It has become a source of knowledge and wisdom for me. I use my Lakota Pipe often, and have begun taking it with me when I lead Wilderness Fasts in order to pray for healing and transformation of the people who are fasting. I also have started taking the Pipe with me when exploring new wilderness areas. Recently, for example, my partner Frank and I stumbled accidentally into an ancient chalcedony quarry on Cerro Pedernal in northern New Mexico. Clearly, this lovely translucent multicolored stone, which lay in large chunks and small chips all over the hillsides, had been used for centuries by the local Puebloan people for arrowheads, ax-heads, and other tools. The energies were so strong there, we felt uncomfortable and a little sick. I had the “hit” that the ancestors felt invaded. The quarry was well off trail and hidden in an arroyo, so likely was rarely visited. We decided to do a Pipe ceremony for the guardian spirits of the quarry. Instantly the energies felt more harmonious and we had a feeling of being welcomed to this magical place

I have come to understand that one of the “job descriptions” of Tobacco is to create a pathway through the veils to help us access our helping spirits more powerfully. It also is a very strong cleansing agent (as in the house clearing Eliza and I did). Whenever I smoke Tobacco in a Pipe ceremony, or even in a cigarette, I immediately feel the connection with the ancestors and other helping spirits. It clears my mind and grounds my energy. I have also expanded my relationship with this Ally by making the acquaintance of Mapacho, a type of Tobacco used in healings in the Amazon. Whenever I travel to Peru I scour the Cusco Witch’s Market looking for cigarettes made with Mapacho to incorporate in healing ceremonies, to ask for blessings, and to help cleanse energies.

I have also been shown by Navaho elders some simple ways to use Navaho “tobacco” for blessings and prayers. Navaho “tobacco” is composed of several plants gathered in a sacred way on the San Francisco Peaks and other parts of the Navaho Nation. These plants, though not actually related to Wild Tobacco, are smoked in cigarettes or Navaho style Pipes, have cleansing and healing properties, and help calm the mind during stressful times. I am so grateful to my Navaho friends for showing me these things. I am grateful to make the acquaintance of new friends in the plant world.

Since that day in the Chiricahuas, when the Wild Tobacco made itself known to me in a very personal and obvious way, I have been blessed with many opportunities to strengthen my relationship with this Ally. I now know it as a friend, a way-shower, and a magical healer. Indeed, my Ally has helped me see that my deepening relationship with it and my intentions to make use of it in a good way for the benefit of others, are far more important than whether or not I do a ceremony exactly right.

With all gratitude to the elders who have shared their knowledge freely with me, the plant itself has been my most important Teacher.

Carol has been leading Wilderness Fasts and pilgrimages to sacred sites for many years.

She is an initiate in the lineage of altomisayoks in the Peruvian Andes, and takes students there annually. She has recently created special volunteer projects in Maras, Peru to help the children of this rural impoverished Andean village. She is a Board member of the Andean Research Institute, as well as a teacher at Southwestern College in Santa Fe, NM.

According to the Original Agreement People could become Plants But only if they kept the rituals ...

Our indigenous elders and healers tell us that ancestors can get stuck on the earth plane...

Musings from Wahatoya, The Spanish…