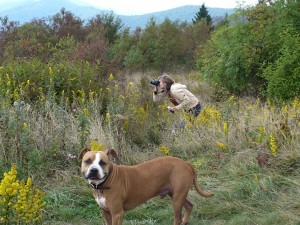 I met a friend for an early morning spring run and brought Bandit along. We ran through a neighborhood, along the river and back into the neighborhood. We ran and ran past houses, over bridges, on trails and back to the sidewalk. With about a mile left, my friend opted to walk. I decided to keep running. As Bandit and I began to move further away from my friend, he kept looking back at her. I tried to encourage him to keep moving forward, at which he stopped moving, sat on the sidewalk and waited for my friend to catch up. Together, we walked the rest of the way. 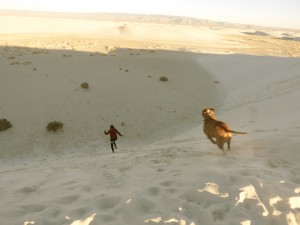 At the park the other day a dog, with his fur raised, charged full speed toward Bandit. The dog appeared to have somewhat of an aggressive nature, and Bandit, upon seeing the dog running toward him, turned around and ran the other way, out of sight. The owners of the other dog looked at me alarmingly, “Where did your dog go? Will he come back?” I smiled and kept walking. Bandit met up with me a minute or two later, and I silently thanked him for reminding me that it is always okay to leave when something feels dangerous or uncomfortable. 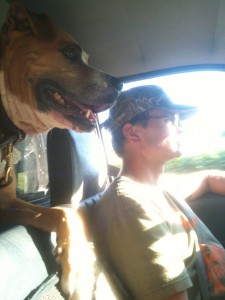 Bandit and I walk around the city a lot. Sometimes, we walk past La Choza, through the park, make a quick stop at Whole Foods before weaving through the galleries of the Railyard. Other times, we walk so I can admire The Shrine of Our Lady of Guadalupe, continue on to navigate the narrowly curving roads that embrace derelict sculptures and mosaics, and observe the presence of the swifts that perch on the roof of the Arc bookstore. We pass many dogs and people on our walks. When someone is walking behind us, Bandit stops, looks over his shoulder, observes the person and then keeps walking. When we pass another dog, he does something similar occasionally with more sniffing and excitement. In his seemingly abundant love for humanity and all of life, he makes brief contact with every creature that crosses his path. 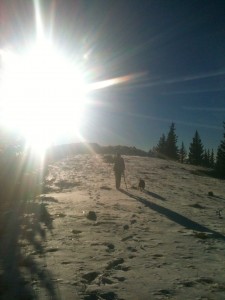 4. Feel deeply, believe in the extraordinary.

I had a nightmare about Bandit. A group of men were trying to steal him, presumably to sell him as a fighting dog. This dream was intense and drawn out. Throughout, I was desperately trying to hide Bandit, so no one would take him. In waking life, Bandit came into my room and started whining at my bed. This is a rare occurrence, and I thought it was quite strange. I told him to go lay down and fell immediately back into the same nightmare, hiding Bandit in an attic. Once again, in waking life, I woke up to Bandit standing by my bed whimpering. I got up and let him outside, assuming this would relieve him of his whining. I let him in, and again fell back into the same panicked dream. One last time, Bandit woke me up. I sternly told him to go lay down and watched as he walked out of my room into the next room. I woke up in the morning to find that Bandit had gone to the other room, carried his blanket into my room, and made a bed for himself on the floor as close to me as possible. He has never done anything even remotely like this before, nor have I ever had such an emotive, disturbed dream about him. And, I just think, wow…I really don’t know anything. Innumerable possibilities abound. 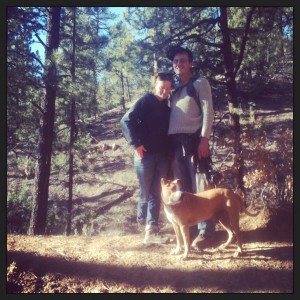 What I Learned About My…

Counseling student at Southwestern College, explores his own gender, and which gender language best suits him....

by Lisa Marie Paradis   Where do you hail from? You and yours snug tightly In between...