This week has been one of manifesting intentions.

Yesterday morning began as any other here on the compound.  The mountain summits rose majestically unabashed by gathering clouds.  The dogs scurried to my door and I exited my casa to make my morning coffee. The Women of Maras began to arrive shortly before nine for their weekly weaving group. Those serious few had arrived early and had already set up looms and were inspecting the density and texture of the wool that they spun. The remainder of the group of some thirty women arrived.  Eli called the gathering to order in a fashion I had not yet witnessed.  It was the first such meeting in which somber tones, graven faces, and serious discussion took place.  Soon the looms lay motionless.  The women suspended their spindles.   Even through my hazy Spanish, the tension was palpable.

What I gathered, and later confirmed, was that the women were being asked as to whether the weaving project should continue, and with it to make a financial commitment by each to pay 100 soles a month to support a brand new mercantile space in the brand new Mercado on the Plaza des Armes in Maras.  The discussion continued for well over two hours.   In the end, a vote and consensus was achieved. 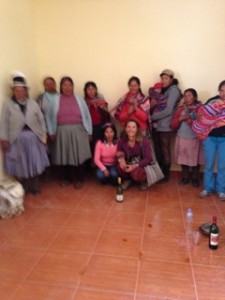 I asked if the ladies would like to hold a Despacho (a traditional Andean spiritual ceremony in which a gift is offered to the mountain spirits and mother nature) in order to celebrate the new store named Apu Aywayru.  The name Awyayru derives from the name for the mountain that rises behind the ARI compound in which the women gather and where I reside.   The women agreed that a Despacho ceremony was in order.  After more discussion it was felt that a pilgrimage to the new store would be the best locale for the ceremony.  And so we walked, down the Incan styled rock infused cement roads, past the various herds of sheep, goats, and donkeys and into the brand spanking new Mercado. The store was located on first floor, first door on the right.   Juan Condori’s tall sister unlocked the doors.  From the now opened double doors appeared a small, clean, windowless room.  The electricity was not yet hooked up and so we all sat upon the floor with the door ajar.  The women removed their stove- pipe hats.  I looked to Rosa looking at her white hat with the buttons creating a large heart on the black hatband.  I had never seen her without her proud hat before.  She looked vulnerable, if not undressed. 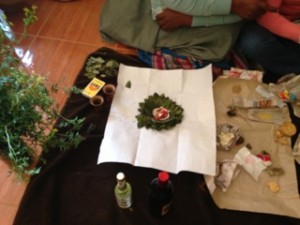 I opened my bag, and unfurled my poncho, an “antique” one I had purchased last summer in Pisac made from Alpaca yarn.  I laid out a large amount of cocoa leaves around the periphery so that each woman could fashion a kintu of three cocoa leaves.   I placed the Palo Santo and bottle of floridita water on the poncho alongside my mesa, bell, and other accoutrement for the ceremony as well as a bouquet of white and red flowers and the two small ceramic wine cups.

What struck me as surreal is that I had just the day previously, gone to the Urubamba market’ shaman’s stand and purchased the wine de Tierra, the wine needed for a full-scale despacho gift for pachamama and the apus. I asked the wife of a local shaman to lead the ceremony.  She accepted.   I felt her the most appropriate master of ceremonies and she did not let us down.   First she placed a shell in the center of a crisp piece of paper having drawn a large white cross with sugar across the paper.   This cross commemorates the Southern Cross constellation known to generations of Peruvians as they gaze up at their star filled skies.   She masterfully placed the kintus having dipped them in the Tierra Wine (three cocoa leaves held, prayed upon, and blown upon three times to physically commemorate the prayers and intentions of the kintu bearer) in a circle at the center of the wrapping paper the despacho was built upon.   The women asked me to be the Godmother of their new store, which seemed appropriate as this was a bit of a christening!  I explained that I was honored but that I was due to return to the United States in just two months and wanted to make sure they felt me to be appropriate to the task.   They felt it was no problem and the kintus continued to arrive as if on a conveyor belt.  Our shamaness placed a leg of a long deceased starfish, llama fat, llama fetus, confetti, seeds, rice, on the Despacho sheet of paper.  She expertly separated the cotton to cover the collection with clouds, and above the cotton clouds, pieces of silvery shiny material commemorating the lightening known to the Andes.  Finally she expertly unwove the thread of the rainbow, creating an arch of yarn, a rainbow of yarn that she placed upon the cotton clouds and synthetic lightening.  She wrapped the bundle, carefully, making sure not to upset the package in any way.  She struggled with what to place at the center.  She reached for a spare cocoa leaf, and then it hit me…..hand her a flower.  Her warm smile was my answer.

What followed was nothing short of a receiving line.  I, the grateful recipient of torrents of confetti upon my head, hugs, and yes kisses upon my check and a sea of “Gracias Mommy”…………DE NADA was my repeated reply.  I was finally a mother after five decades!

There are those moments in life when you feel the ache of joy in your throat.  This was surely one of mine. 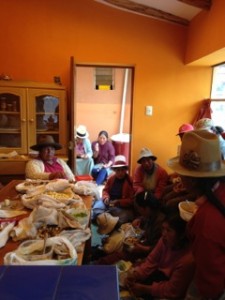 Ceremony complete, we all gathered back on the compound in my kitchen. Curiously I had made my very first Peruvian Soup the night before in a huge pot.  I ignited the propane powered flame to my stove and the chicken bouillion, aparagus, quinoa, potatoes, string beans, fava beans, garlic, ginger, red chili, maras salt, minced squash and greens began to bubble.  I dolled out bowl after bowl of soup. Apparently my soup passed the muster, as the pot was empty and hour later.  I broke out a new pineapple which one of the women, in seeing me struggling first with a mango, which is quite difficult to pear,  cut up the remaining mangos and pineapple and I peeled and added the tangerines. A huge fruit salad resulted.   I had  remembered my mother’s telling me that the pineapple signified hospitality.  The pineapple was my welcome to the ladies to my kitchen.

Lunch over, I turned to my class of children.

Five had arrived early.  Two totally adorable brothers who had been instrumental in day one of labyrinth construction arrived with big smiles and hugs for “professora!” We began with escuela perro.   The Children gathered in a large circle after another calling to Oso, Pacho Villa, and or Oscar to sit, stay, wait, come, leave it all in their developing English.   We continued by brushing the coats of the dogs.  Finished, we headed to the back of the property where Roberto lead the way through the box hedge labyrinth.  Days of development behind us, the children now walked, relatively silently through the shrubs, gathering in the center for their own prayer to Pachamama.  The group reversed the spiral and headed into the escuela for their English lessons in self introduction, and animals in English and Spanish. We then all headed outside to complete the Cretan labyrinth started on Tuesday. 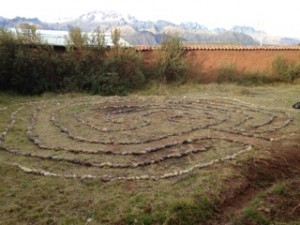 The Labyrinth was completed  yesterday with all the clamoring and excitement that a group of 16 high-energy pre-adolescents can muster.  Each walked to their spot on the path with a rock (piedre) and blew into it three times setting intentions of their choosing to either themselves, their families, pachamama, and any animal or place in nature.  The impulse control required to follow the path, wait for their compares to return to the beginning of the labyrinth, and not sprint out prematurely was a hard won skill of mindfulness that they all employed over time.   I have footage of much of the exercise.  There was also a great deal of joy, mirth, and raucous laughter to be found by all.

The Labyrinth is of a Cretan design, the exterior of which is comprised of solely white stones, which should serve well during moonlit nights.   The entrance of the labyrinth sports three large heart rocks hinting that this labyrinth is dedicated to the path of the heart, Corazon, or Munay, the word in Quecha for love. It took two full classes and many extra hours of my own to create the labyrinth.   I plan to hold a ceremony on Monday during class to commemorate the first walking of the labyrinth and dedication to Pachamama upon which the labyrinth rests, and to Munay.

Last week the Escuela Bonita Pachamama Mural series was completed and hung on the...

Day one with the kids complete.  What utter fun!, and I have limited...

Closing Down by Candy Jones…

The clouds have obscured much of the Apus (mountains) today.  The rainy season is...