Shifting to a World of Bliss – What is More Real? 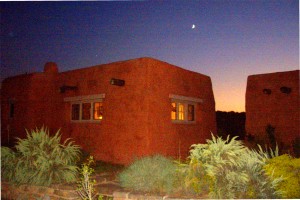 I just read Mindell’s The Shaman’s Body and it reminded me of how much I used to know– how much I have always known that has become deeply buried in the last 35 years. Carlos Castaneda’s Journey to Ixtlan was an important book during my college years.  Now I look back and see that as a time when my inner being became so out of sync with the consensus reality around me, that I couldn’t integrate the two. I drank a lot, painted and partied. I dove into a challenging business life and made promoting art and achieving success my goal. After mastering that, I had children. Parenting then became my world. It was a “happy” life, but it was smaller than me.

It wasn’t until my daughter left for college I and I was offered an artist’s residency in Arizona that I circled back to myself. For two weeks I lived alone in the middle of the desert.

No computer, no TV, no family. I was completely disconnected from my usual world, and I had never felt so alive!  I arrived at this place with only the light of the moon to guide my floating body between tall sage bushes to my little adobe cabin. I had been transported to another land. The warm wind purred and coyotes howled in the distance. I felt complete peace.

Everything during that time was magical. Of course there were the spectacular sunsets and the fabulous mountains and beautiful vistas.  But those things were no more or less awe inspiring than anything else. I was completely in tune with it ALL.  I found a tiny seedpod shaped like a spiral funnel with a sharp point at the bottom.  Immediately, I understood the perfect design of this pod and how the wind could drive this spiral down into the ground with perfect efficiency so that it could live on.  In the night, crowds of prairie dogs would chit and chatter and push their sweet little paws under my door. I never saw them during the day. But I knew they were very much present. Everyday, I painted, and walked, and dreamed. Every second was bliss. I have held that state of dreamlike completeness ever since. Things swirl around me, but they are not in me. I am free.

Using Art to Make the…

Sometimes a concept flashing through my mind can be made clearer when I paint it. I...

You've heard that somehow, somewhere, by working at some obscure place, you might possibly be able...