Being in the northeast, the hustle and bustle of the cities domineers everything. Regionally the energy is impatient, it’s fast-paced, it’s strong-willed. There’s always people, TONS of traffic, and a hundred different moving parts. You were never really encouraged to put your feet into the grass and just allow yourself to be when growing up in New York City. We never really payed tribute or held space for the indigenous people of the land growing up. My catholic school in the Bronx would probably argue that the feathered headband arts and crafts we did at Thanksgiving would count as otherwise. The only conversations we had in school were state-curated lectures centered around textbook curriculum that made Native Americans feel like a ghost of the past. To be incredibly honest, as a kid, I gave it no further thought.

In 26 years of living on this earth, I feel shocked to admit that the first time I’ve ever been invited to participate in a land acknowledgment has been here in my 1st quarter at Southwestern College. It feels shameful to admit, yet I had previously never been presented with the idea of verbally acknowledging the territory of land that I was currently on. Growing up, I had never been taught who originally inhibited this land. But this quarter, I find myself holding the space now more than ever. The Lenape were the original inhabitants of Delaware, New Jersey, Eastern Pennsylvania, and Southern New York. It took me longer than it should have to have the knowledge to be able to hold the proper space, yet now that I have it, I hold the space whole-heartedly.

This has been a catalyst for me to learn more about holding proper space with the earth and its ancestry. This indigenous people’s day, I wanted to continue to push myself in this journey. I joined a small earth and ancestral ceremony I learned about through the grapevine, and Within the crowded, compact state of Jersey, we found a refuge of solace within the state park, Hemlock Falls. I was surrounded by strangers, yet the loving energy that they radiated made them feel instantly like community, like family.

The ceremonial leader, Graciela Fairy Hawk, had the deepest love for the earth that I’ve ever seen a human embody! We paid homage to our ancestors, the indigenous people whose land we were seated on, and Pachamama. Pachamama is the revered goddess, Mother Earth, of the people of the Andes Mountains. Her passion and pure love made me feel so much immense gratitude. I didn’t feel like I was just sitting on grass; I felt like I was sharing deep and sacred space with Mother Earth as a living, breathing, maternal entity. I truly felt the oneness that my body holds with our Mother. Fairy Hawk was so grateful and appreciative to everything. She thanked the trees, she spoke affirmations to the flowers, she sang to the stream. The reverence and admiration she adorned her surroundings with created such a unique spiritual space. I felt like I was looking at everything with new eyes and new appreciation.

“As a society, we tend to get in the habit of just to take, take, take,” Fairy Hawk declared, “But we rarely give back to the earth and lay down offerings of appreciation to show her how much she means to us and allowing us to be in this space.” She encouraged us in her belief of the importance of carrying offerings, as she sectioned out the tobacco for us to individually distribute. I picked a spot by the stream and sat beside it. I watched as the clear water flowed around glistening wet stones and rocks, and for the first time in my life, I thanked the waters that bless us with life. Out loud, I thanked the stream for allowing me to be here, to allow me to use her resources. I sprinkled the tobacco leaves amongst the rocks and watched as the stream carried them down. Whiles this was a scene any other day I would passively admire, this experience was anything but passive. The stream was living and breathing, and eager for my contribution to her. This moment will really stick with me, as I feel like I never once even thought of the concept of an even energy exchange with the earth. And to finally hold that space with her just felt so right. 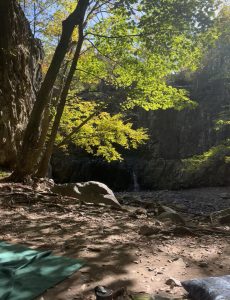 My first week at SWC…

The anticipation from July to September was immense, knowing grad school was a big life step...

Living in the Desert by…

TIME CRYSTAL After W.S. Merwin I see that I...