On Jewels and Gems

She wears the same stone pendant every day, rubbing the stone, so much so, that it has faded slightly in color and texture where her fingers are permanently imprinted. He sits in his chair reading his book, sipping a cup of coffee. He has a loud laugh and he laughs often. His eyes are soft, and his smile, genuine. He wears large hoops in both ears. Their size is noticeable, his hoops are both earthy and eccentric. I notice that my hand is wrapped around my necklace, as if giving it a hug.

Jewelry has long had significance in cultures around the world. At times it represents a symbol of status, such as the crown jewels in the U.K., that have been passed down through generations of monarchy. In Ancient Egypt, Pharaohs were buried in ornate jewelry as a sign of wealth and importance. Jewelry can also serve utilitarian purposes. In Greece, a brooch was first introduced to hold togas in place. Sometimes, jewelry can speak to ancestral roots such as the beadwork of the Zulu tribe of South Africa which can signify either where the wearer is from or what family they belong to.

In the U.S., we are familiar with jewelry signifying a special occasion such as a wedding or engagement. We may find meaning in jewelry because of our birth stones, or inheritance. Hand-crafted jewelry by members of Native American Tribes may have cultural and historical significance, communicating layers of tribal, individual and artistic identity. Some jewelry is significant because of the message conveyed from the giver to the receiver: best friend bracelets, promise rings, a gift from a close relative or significant other, etc.
I am curious, what are the adornments we hold so close, and why? A few stories and sentiments about our jewels and gems: 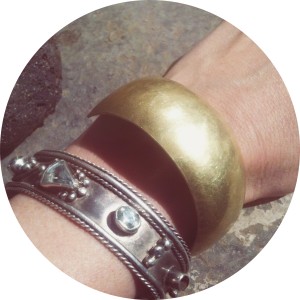 “I almost always wear these two bracelets together. The brass cuff, is the first bracelet I ever made. Even though it is simple, it took hours to make. The silver and jeweled bracelet, was given to me by a close friend, shortly after I completed the brass cuff. My friend explained that the bracelet had been passed down to her by a family member, and that it was missing a stone. My friend no longer wore the bracelet and passed it on to me with the hope that I would wear it, and perhaps, one day add the missing stone. So, now I wear these bracelets together to act as a reminder to keep creating and to keep making jewelry.”

The Great Tale of the Zuni Necklaces…

“When I was about 18 years old, my mom gave me a silver piece of jewelry with a double cross, a tiny piece of turquoise, and a little half moon at the bottom. She told me that she had worn it quite a bit as a teenager after her mother had given it to her back in the 1960s. I just thought it was a really beautiful piece of jewelry, and for many years, wondered what it meant. It certainly wasn’t a common symbol in my hometown of Chicago.

About seven years after she had given it to me, she and I visited Northern New Mexico. I finally figured out what the symbol meant on that trip! I saw the symbol everywhere and read in a traveler’s magazine that it was a Zuni dragonfly, but looked like a cross so that the Zuni people could fuse their symbolism with Christian symbolism.

I became very interested in Zuni mythology after learning about my necklace. I read a book of Zuni myths and found a 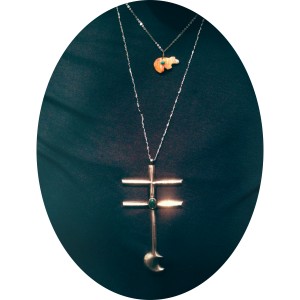 really beautiful story about the dragonfly. The story is very sweet. A village had an abundance of corn, so they threw a big feast and invited neighboring villages to the feast to show off their abundance. The neighboring villages weren’t allowed to eat anything at the feast. The corn maiden’s decided to create a drought for the village with abundance. During the drought, all of the people fled the village, but left behind a little boy and little girl. The children were starving and could not find food anywhere. In order to calm the little girl, the little boy took a piece of corn husk and made her a butterfly, but when he was finished, it didn’t quite look like a butterfly, but rather a dragonfly, and it also came to life. The dragonfly flew away to the corn maidens and told them about the children. The corn maidens visited the children and brought them to an old woman who had also stayed in the town, and once had been kind to the corn maidens, so was not cursed with a drought. The old woman fed and cared for the children until they were grown.

When I moved to New Mexico, I started wearing my Zuni dragonfly necklace pretty often. I also started working on a pueblo here. After a series of unfortunate events in my own life, my friend, a very kind Zuni man I work with on the pueblo, made me a bear fetish to wear. The bear is supposed to bring me good protective medicine, and to be more intuitive about when to keep my heart open and when to protect it.

So now I wear both necklaces. They serve as reminders of the love in the world as well as good medicine to move happily and lightly on my own mysterious path in life.” 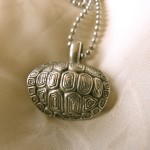 “After being told at work that I was ‘soooooo slow,’ I could feel the turtle in me hiding it’s head, feeling a bit ashamed. I had never been fast, and could never quite understand how to act with more speed. A few days later, I traveled for about 12 hours to meet my boyfriend’s grandma for the first time. It was wonderful to spend time with her. She is a funny and loving woman. At one point I saw her whispering to my boyfriend. She handed him something, which he then handed to me. It was a turtle necklace. She looked at me and said ‘I think you might be needing this.’ I was curious about why she thought I needed this, I had not told her about my experience at work, or my long-standing relationship with turtl 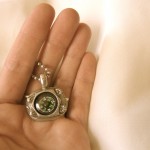 es. She then told me to turn it over, she pointed out that embedded in the turtle’s belly, was a compass. She said ‘this way, in case you ever are lost, you will always know where you are.’ And feeling lost, I was. I wear the turtle necklace now, whenever I’m needing some extra guidance. My resentment over the slowness in me, has changed into an appreciation for the persistence, wisdom and grounding of the turtle.”

Please share the significance of a piece of your jewelry!

Lead-in Students new to Southwestern College in the fall of 2016 were invited to introduce themselves...