TLDR:
White privilege is entrenched in our society, and not where it might be expected. Many people who consider themselves “not racist” act in ways that are still oppressive. Racism and oppression are as much “ways of being” as “words” that are said. I was surprised that I have a history of being an oppressor as I look back over my life and I grapple with my own white privilege every day.

This is my reflection on reading “Unpacking the Invisible Knapsack” by Peggy McIntosh for the Multicultural Portfolio at SWC. This post is a long read, so bear with me. (It is a college paper, and those tend to be a bit long-ish…)

If you prefer to download and read the paper as a PDF, here is a link.

Before we start, if you don’t know about McIntosh’s article, here is a link to a Youtube version (gotta love technology!)

When I first encountered this article (“Unpacking the Invisible Knapsack” by Peggy McIntosh) in Multicultural Perspectives in Art Therapy last year, I had no awareness of white privilege, or the extent to which I was a participant and oppressor. It was truly eye opening and life changing. And it was terrible, and in its terribleness, I began to see that my pain, while real and legitimate for me, was nothing compared to the lives of those who live in oppression as a result of white privilege. Until then, I thought we were all the same and equal. It was what I had been taught, and it was what I had experienced. I had gone from high school dropout to college professor. What could be so hard about getting out of the ghetto? (I used that phrase on purpose, bear with me…) I had no idea that this was a privileged worldview, nor how racist it was at the heart of it. Having lived in a homogeneous world of white privilege for all my life, I took the “reality” of what the dominant culture was feeding me and assumed it was true and that racism was a relic from the 1960’s. I also assumed all black people lived in urban areas, which on good days, my mom called the “ghetto.” I won’t repeat what she usually called black neighborhoods, and THAT was what I grew up thinking was racist. Certain words. Not ways of being… Now I can see how privileged and small that view of the world is. 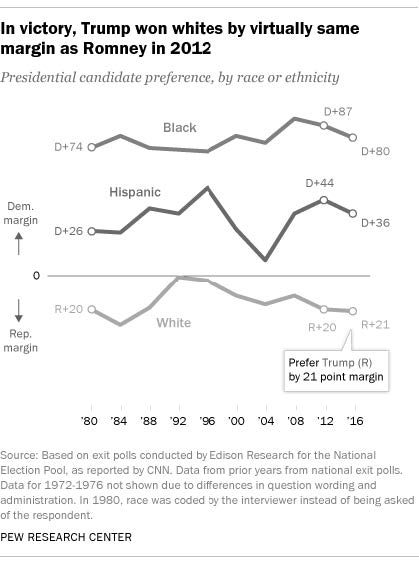 Reading this article again, and joining in an event by the Diversity Workgroup to discuss it with other students, I am now able to see it on an even deeper level. It is a difficult process to discover these things, and to own them. It is even more difficult to shut up and let those around me speak. And for the most part, that is what I did at the discussion session and it was beautiful to deeply listen to those around me and to note where and when my own experiences were similar or different. And also to note when I was feeling uncomfortable. And that is the key, I think, to this article. For me, as a white person of privilege, it is uncomfortable, but vital, to examine these things. And I have come to see that most don’t want to “go there,” as though it is a place to visit, not the world in which we live…

I see how entrenched this worldview is in the very fabric of the dominant culture. White-privilege-in-action is evident in the election results, as can be seen in this link and the graph retrieved from:
http://www.pewresearch.org/fact-tank/2016/11/09/behind-trumps-victory-divisions-by-race-gender-education/. 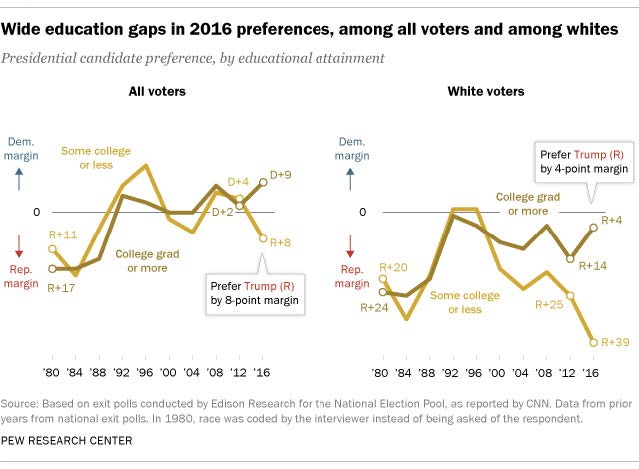 When education is the factor, the results are even more substantive, as shown in the graph to the right, also from the same website. Of course, these are exit polls, and not academic studies, but the evidence of the election outcome shows why “Unpacking the Invisible Knapsack” is so very important. There is a clear racial divide in this country, and while a fair number of white people I know consider themselves to not be “racist” the fact that so many of us are oblivious, and even willfully ignorant, to our privilege, is very troubling.

Unfortunately, this blindness is not something that is strictly delineated by educational, or even age, lines. This
PBS article from March 2015 (based on data from 2012) is something I find to be very troubling, showing the attitudes of “Millennials” toward blacks and whites on certain issues. 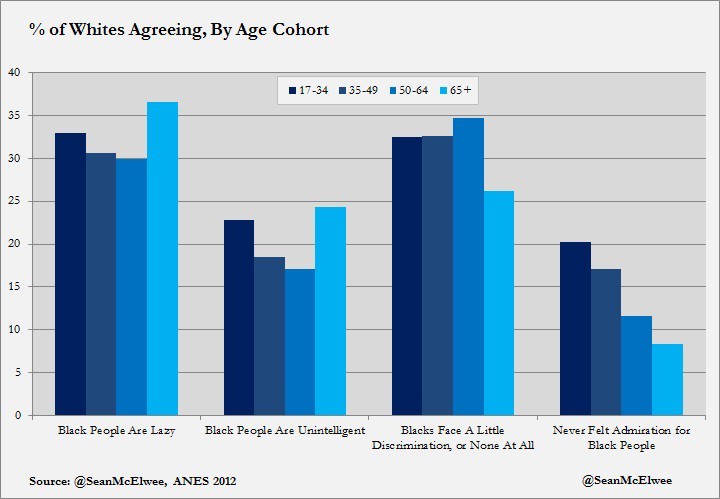 The graphs in blue are from the link above, and very, very troubling to me. This data proves to me that the problem is far less about any one issue, but instead a foundational belief system rooted in a variety of issues, which is exactly what the article we read indicates. 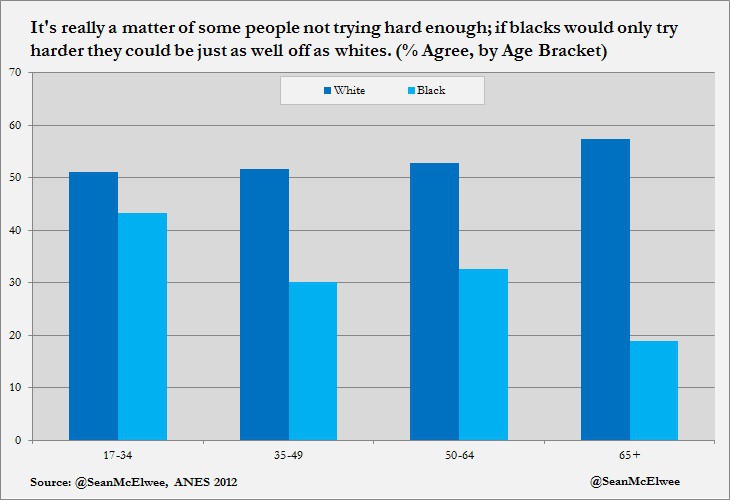 When the basis of a society is so skewed toward one group of people as the “cultural norm” it will infuse all aspects of that which is controlled by the group in control.

I am a perfect example of how being educated is not necessarily an indicator of being blind to my own
privilege. I went to Earlham College in the early-mid 1990’s, and while I learned amazing critical thinking skills and had my first real encounters with people unlike myself, I was never taught about racial division, white privilege, or cultural appropriation, just to name a few of the topics that have recently come into my awareness. I am not blaming the educational system, and it is possible that these things were presented to me, but that I could not comprehend them, but I suspect that it was an example of dominant cultural norms and a reflection of the very dominant white culture that shaped our educational system. It is also likely another example of my own white privilege because I know there was a department of African and African-American Studies, headed by Phyllis Boanes, and I was terrified of her. I thought it was because she was mean to me once, but I wonder what I did or said that warranted her treatment of me? In retrospect, I am pretty sure I did something to provoke her, but I have no idea what it was. I am sure I was afraid of her before I ever encountered her, which is a lovely gift from my invisible knapsack. I doubt that anyone has ever been afraid of me because of stereotypes about the color of my skin, but I am sure there would be situations where this would be true… Even though Earlham was a wonderful experience and a major step toward my own enlightenment, I know for a fact that it was possible to get through Earlham, do very well academically, and completely miss education on racial issues. (It makes me ashamed and sickened to type about how I was, but it is just more proof to myself that it is paramount that I tackle these issues – what if Professor Boanes had been a client of mine??? What if I had never opened to examining these issues within myself and instead chose to turn a blind eye???)

Another issue that I found fascinating that is shown in the PBS article is that of generational trauma and
the current realities that accompany historical oppression. Once again, these are ideas that are new to me
because I have lived my life until now in a vacuum of white privilege where I was surrounded by people who
looked like me, taught about people who looked like me by people who looked like me, grew up thinking the
idea of “civilization” was based on the acts of white men, and I have had the privilege of being “different” and
not having it be a reflection on my race; I was just “weird,” but it was centered on me, not my lineage. Any oppression I might have faced was centered on me as a person, not me as a white person. 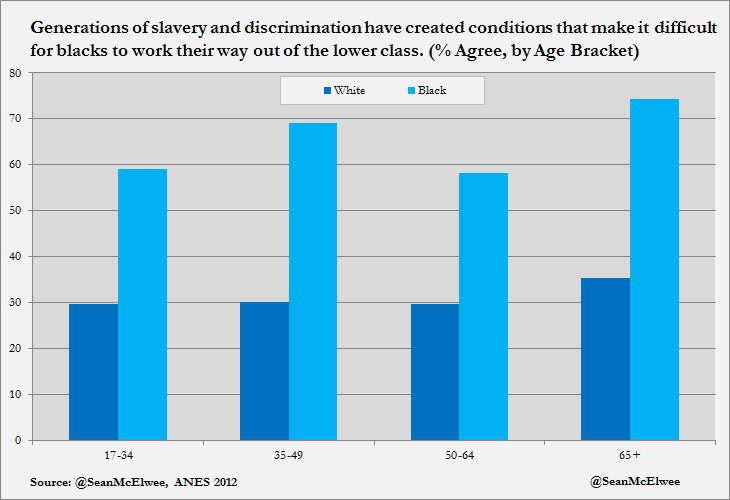 The realization that I have lived a life of privilege has been very enlightening to me. As proven to me by
the various things I have read and experienced lately, and from the current state of our country, many people find it easier to turn a blind eye and ignore anything that is uncomfortable. Many WHITE people, that is, because we have that option. For those who are on the other side of white privilege, ignorance is not an option. It is impossible to ignore the oppression that calls the integrity of an entire race of people into question merely because of how you look.

I have made a conscious effort to look straight into the face of my position of oppression and privilege
and do whatever I can to open my eyes to the reality of the world in which I live. I believe by sharing my own
journey I might be able to help others open their own eyes to the realities of white privilege. I am by no means
enlightened or unbiased, but I am trying to become aware so that I can begin to change my actions. And I am
willing to take action.

I was so moved by this reading that I found a video on YouTube of it (the one at the top of this blog post) to share with my friends on Facebook (knowing people won’t read an article,) and I was shocked by the number of interactions I had with this post, as you can see in the screen shot below. I have over 1,000 friends, and I set the privacy settings to “Public” so anyone could see and share it. A funny picture of a cat I posted got over 200 responses once. This? Nothing. Really? It is not ignorance but rather apathy that is the greatest roadblock to unpacking the invisible knapsack. And apathy is the biggest white privilege of all… The issues we face in this society are monumental and very, very entrenched, and sadly, quite invisible to the oppressors, either by choice, apathy, or ignorance. White people tend to be focused on things that comfort and entertain us, but at whose expense? 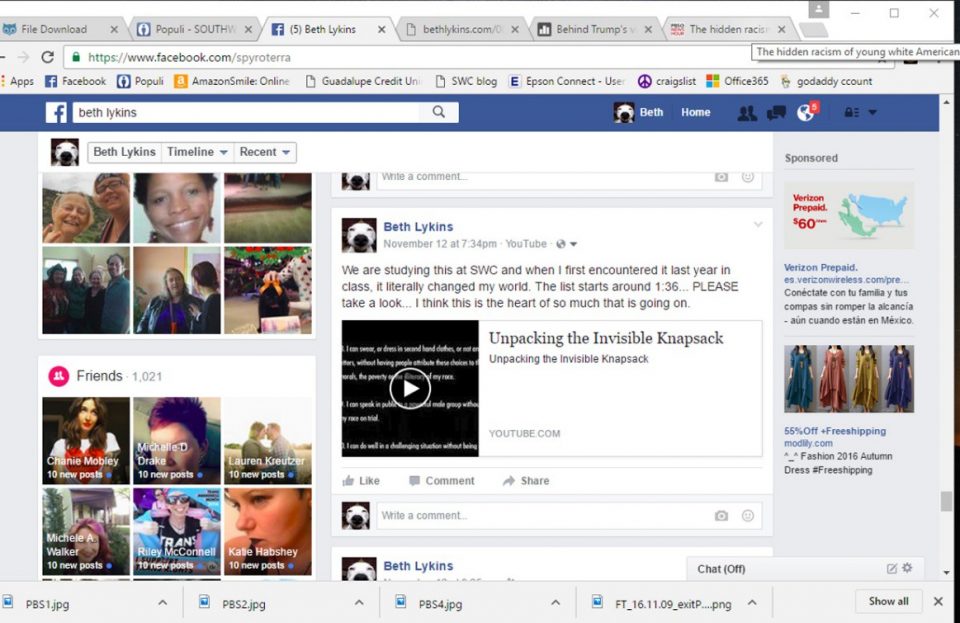 (WHEW! You made it! Go YOU! Thanks for reading.)

Facing My Privilege of Congruency…

A Letter to Potential SWC…

Hello! My name is Beth Lykins, and I am a current student at SWC. I am...

On Being a Man in…

Back in the 1990s, when I was in graduate school the first time around (for my...